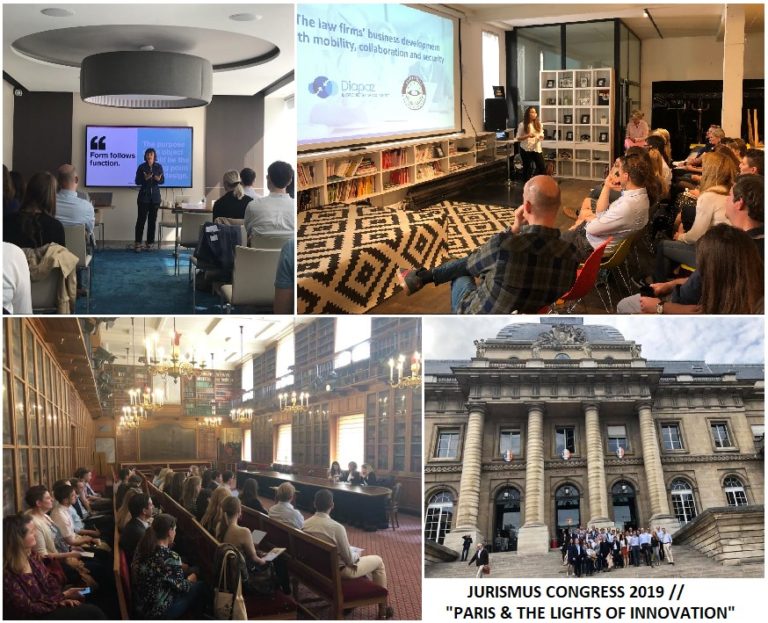 This year’s Jurismus congress took us to Paris: the City of Light and the 2017 European Capital of Innovation. As a global centre for business, tech, fashion, gastronomy and culture, Paris leads the way for innovation across a number of industries.

We stayed in the famous Bastille area and had our first meet up on Thursday night. We had dinner at Hostaria Urbana, a restaurant which takes inspiration from Italian ostarias, informal wine bars/restaurants. It was a lovely, relaxed setting in which to catch up with familiar Jurismussers and to get to know new faces.

Our Friday seminars were hosted by organising firm Cornet Vincent Ségurel. The first topic was “Legal Design & Compliance” by Marie Potel-Saville, Founder & CEO of Amurabi. Marie explained how employing design principles when preparing legal documents can make them clearer and more accessible to the end user.  She showed us a compliance policy which her company had re-designed for a business client. Rather than being pages of text, the policy was broken down into sections and presented in plain language with accompanying diagrams, icons and timelines. This made the policy easier to understand, and ultimately resulted in better engagement with the policy from the client’s employees.

Our second topic was “Law, Digital Transformation & Blockchain” by Pierre Lasvigne, Co-Founder & CTO of Seraphin.legal. Pierre helped to de-mystify how blockchain works and explained how blockchain technology can be employed in the legal world. An example he gave was of smart contracts, which enable the automatic execution of contracts and provide clear digital proof of the transaction which has taken place.

We had a coffee break on the terrace in the sunshine which was a great opportunity to network and strengthen connections.

Our final topic of the day was “Big Data & Quantifying the Judicial Risk” by Jacques Lévy Véhel, Co-Founder & CEO of Case Law Analytics. Jacques explained to us how artificial intelligence can help lawyers in assessing the strength of a particular case and in informing their case strategy. He showed us the database of case law his company has compiled, and demonstrated the analytic capabilities of the computer programme they have developed.

We had lunch in a typical French restaurant called Brasserie Maison Rouge. They did not skimp on portion sizes and we were then well fuelled for the next part of the programme!

We left the court and walked a short distance across the Saint-Michel bridge to the Eurojuris offices for a drinks reception, where we were warmly welcomed by Sophie Clanchet, President of Eurojuris France.

On Friday evening we had dinner at the famous Café Francoeur restaurant, where we discovered more delicious French specialities. Dinner was followed by a walking tour of the Montmartre area including, of course, the Sacré-Coeur and its spectacular hilltop view.

On Saturday morning the Jurismus International Annual General Meeting was held not far from our hotel at Le Tank, which provides shared workspaces for creative minds in the tech industry. Our president, Sven Farbrot, reported back on the work which has been undertaken by the Jurismus Board over the last year, including in particular the JUMP programme (JUrismus Marketing Programme) which facilitates exchanges between law firms. Céline Heinkens of Belgian law firm Legrand & Vennoten gave a presentation about her recent “JUMP” to Cornet Vincent Ségurel and provided a first-hand account of her very positive experiences.

It was announced that the 2020 Jurismus International congress will be held in the port city of Rotterdam. The congress will be organised by Aniek Thissen of Dutch law firm Van Dam & Kruidenier Advocaten.

The AGM finished with the board elections, four of the six members of the board having come to the end of their terms. Two new board members were elected: Aniek Thissen (Netherlands) and Miriam Porcar (Spain). Lieven Van Besien (Belgium) and Sophie Hearle (UK) were re-elected for a second term. Sven Farbrot (Norway) and Lucile Quentel (France) both remain on the board, with a further year of their terms remaining.

The AGM was followed by two talks, the first of which was from Tim Becker, a German Eurojuris lawyer and previous president of Jurismus. Tim highlighted the opportunities which the Jurismus network offers in terms of collaborations between European lawyers. He gave guidance on how to identify a suitable lawyer to assist on matters with an international dimension, how to introduce them to the client and how to manage client expectations on both sides.

Our final talk of the congress was by Valérie Maculewicz of Xelya who gave a presentation on the legal software Diapaz, which offers opportunities for lawyers in terms of mobility and collaboration, without compromising on security and confidentiality.

We had lunch at Hipppolyte, a crêperie near Notre-Dame-de-Lorette, before embarking upon a virtual, airborne tour of Paris at FlyView. This virtual reality adventure involved a simulated jet pack flight which gave the experience of flying over Paris and its famous monuments. A very novel and innovative way to explore Paris!

With our feet back on solid ground and in teams of five, we took part in a treasure hunt in the centre of Paris, which put to the test our skills of collaboration, communication and creativity. Do check out the Jurismus Facebook page to see exactly what we got up to!

The final soirée of the congress took place at l’Atelier des Artistes in the République district. Being in one of the style capitals of the world, the very fitting theme for our closing evening was “Fashion Week”, giving Jurismussers the opportunity to let loose their inner fashionistas!

Huge thanks go to Lucile Quentel and Aurélie Vucher-Bondet both of Cornet Vincent Ségurel for organising such a memorable and engaging congress.

The dates for the 2020 Jurismus congress in Rotterdam are 18-21 June – the Jurismus Board looks forward to welcoming you then!